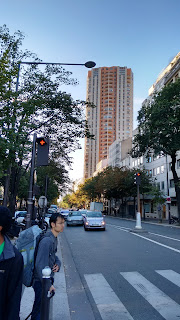 After a one year and a half absence, the Darcs Hacking Sprint returned!

Once again, the event occurred at the IRILL (Innovation and Research Initiative for Free Software) in Paris, on September 18th to 20th.

Thomas Miedema is a Haskell and GHC hacker, and came on the first day of the sprint. Since Darcs is a system that aims at supporting the various GHC versions out there, Thomas helped us preparing for GHC 8, the next major version. He explained us one issue of GHC 8 that got triggered by Darcs: a bug with the PatternSynonyms extension. Fortunately it seems that the bug will be fixed in GHC HEAD. (First release candidate is planned for December).

On the first day I (Guillaume) claimed the "rollback takes ages" bug, which made me look into SelectChanges and PatchChoices code. The result is that I still haven't yet fixed the bug, but I discovered that patch matching was unnecessarily strict, which I could fix easily. Internally, there are two interesting patch types when it comes to matching:
Now, getting the NamedPatch for some patch is then obviously more costly than a PatchInfoAnd. You may even have to download the patch file in order to read it (in the case of lazy repositories). Moreover,  the majority of matchers only need the patch info (or metadata), not its actual contents. Only two matchers (hunk and touch) need to actually read the patch file, while matching or a patch name for instance (probably the most common operation) does not.

So, before the sprint, as soon as you wanted to match on a patch file, you had to open (and maybe download) its file, even if this was useless. With my change (mostly in Darcs.Patch.Match) we gained a little more laziness; and the unreasonably slow command "rollback -p ." passes from 2 minutes to ~15 seconds on my laptop. I hope to push this change into Darcs 2.10.2.


Now, the real source of the "rollback -p ." slowness is that patch selection is done on FL's (Forward List), while commands like rollback and obliterate naturally work backwards in time on RL. Currently, an RL is inverted and then given to the patch selection code, which is not convenient at all! Moreover, the actual representation of history of a Darcs repository is (close to being) an RL. So it seems like a proper fix for the bug is to generalize the patch selection code to also work on RL's; which may involve a good amount of typeclass'ing in the relevant modules. I think this will be too big/risky to port to the 2.10 branch, so it will wait for Darcs 2.12. 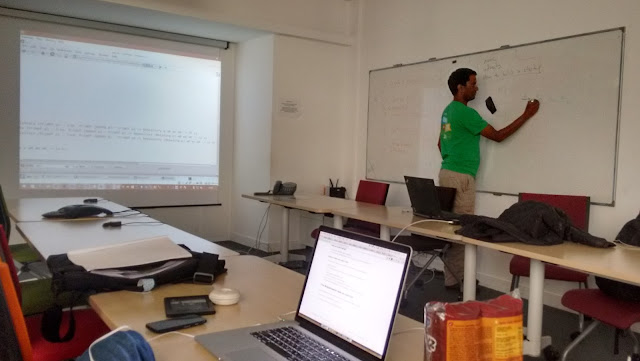 A few days before the sprint, Ganesh unveiled his "stash" branch. It feature a refactoring that enables to suspend patches (ie, put them into a state such that they have no effect in the working copy) but without changing their identity (which is currently what occurs with the darcs rebase command). This enables to implement a git-stash-like feature.

The sprinters (IRL and on IRC) discussed the possible name of the command that should encapsulate this stash feature. More importantly, on the last day we discussed what would be the actual UI of such a feature. As always when a new feature is coming to darcs, we want to make the UI as darcsy as possible :-)

Coming back to the code, Ganesh's refactoring, if extensive, will also simplify the existing types for suspended patches. We decided to go with it.


Daniil Frumin was this years Google Summer of Code student for Darcs. Mentored by Ganesh, he brought improvements to Darcsden, many of them being already deployed. Among them, it is possible to launch a local instance of Darcsden (using an executable called den), not unlike Mercurial's "serve" command.

Dan tells more about his work and this sprint in his latest blog post.

As a newcomer to the project, Vinh took a look at the documentation, especially the website of the project. He implemented changes to make the front page less intimidating and more organized. He also had a fresh look at our "quickstart" and proposed improvements which we felt were much needed!

For this sprint, Florent was more an external visitor than a Darcs hacker. He talked about one of his current projects: Pijul, a version control system with another approach. Check out their website!


Conclusion and the next sprint

In the end this sprint turned out to be more productive and crowded than we initially thought! It has been a lot of time since the previous one, so we had a lot of things to share at first. Sprints do make synchronization between contributors more effective. They are also a moment when we can get more concentrated on the Darcs codebase, and spend more time tacking some issue.

We would like to thank the IRILL people for hosting the sprint for the third time and our generous donators to make travelling to sprints easier.

We already have a time and a place for the next sprint: Sevilla, Spain in January 2016! The exact moment will be announced later, but you can already start organizing yourself and tell us if you're going.

Posted by guillaume at 3:48 PM

What an excellent post. Thanks for sharing this. Best Appliance Repair in Edmonton