The Darcs Hacking sprint was co-located in Vienna, Austria and Portland, Oregon, USA.
The Vienna team had a unique experience as the sprint happened to coincide with a student protest that resulted in an occupied University building. Great fun was had by all as we shared our hacking space with the Occupiers on Saturday.
The Portland team was graciously hosted by Galois. As a special treat, we got a visit from Thomas Hartman, one of the folks behind Patch-tag.

Among other things, the upcoming Darcs 2.4 release has some nice performance improvements from Petr Ročkai's hashed-storage work.
One first goal in this sprint was to polish up this work, making our hashed repository support good enough for GHC team to upgrade from the deprecated old-fashioned format. We think we've largely accomplished what we set out to do. Read on for more details!
Our second goal was to provide a space for new Darcs hackers to get started with making contributions to the project. We had 14 new Darcs developers at this sprint! We hope that they will stay on with the project and continue submitting patches.

Note that some of this work is still pending patch review or amendements.

Thomas DuBuisson and Jason Dagit studied some hanging merge cases on the GHC repository to see if we could garner some insights into them. While this did not yield much fruit, it did result a few code cleanups.
Jonathan Daugherty and Josh Hoyt took a tour of the Darcs source. We hope they'll be joining us as Darcs hackers in the future :-)
Jason Dagit produced a concrete and low-level description of the Darcs record command.

As a warm-up exercise, everybody worked on tidying the Darcs and hashed-storage source, eliminating annoying GHC warnings and implementing suggestions from hlint.

Tomáš Caithaml simplified the darcs show authors authorspellings code by rewriting it in Parsec.
Jason Dagit cleaned up the elegant_merge function and removed commutex in favor of commute.
Jonathan Daugherty submitted some improvements to the user manual.

Luca Molteni improved Darcs's handling of the global cache, splitting it into buckets for better performance.

Tomáš Caithaml got darcs convert to abort in case user accidently tries to convert a darcs 2 repository a second time.

Christian Berrer extended the darcs optimize --upgrade command to also act as plain old darcs optimize in addition to upgrading the repository format.
David Markvica modified darcs get --complete so that it no longer offers to create a lazy repository.
Benedikt Huber relaxed the assumption that darcs executable would be called "darcs", instead fetching this from the command line.

Matthias Fischmann and Radoslav Dorcik worked on a new trackdown --bisect feature for darcs trackdown which makes trackdown more useful for larger sets sets of patches.
Roman Plášil implemented an oft-requested remove -r feature, making it easier to undo accidental adds of large directories.
Luca Molteni implemented darcs show files with an argument to limit the output to a specific file or directory.
Thomas Hartman implemented matchers support for darcs show files, allowing to get the list of files tracked by Darcs at a given point in the history (eg. darcs show files --tag 2.4).
Petr Ročkai worked on a new more extensible, self-documenting format mechanism as a future alterantive to _darcs/format.

Reinier Lamers continued his work on storing darcs patch metadata in UTF-8. He worked on autodetecting UTF-8 content (in the patch metadata) and found some subtle bugs in the utf8-string library along the way.

Joachim Breitner made some improvements to the darcswatch core and user interface. He also added hooks to Darcswatch for integration with Darcs Team patch tracker. Joachim Breitner, Eric Kow, Petr Ročkai also added some polish to patch tracker, in particular to its email gateway interface and interaction with the darcs-users mailing list. The result of these efforts is a more efficient Darcs Team with simpler and smoother patch review process.
Kim Wallmark worked on making the 'cabal test' friendlier by outputting the amount of time elapsed after long tests.

Priorities for the Sprint 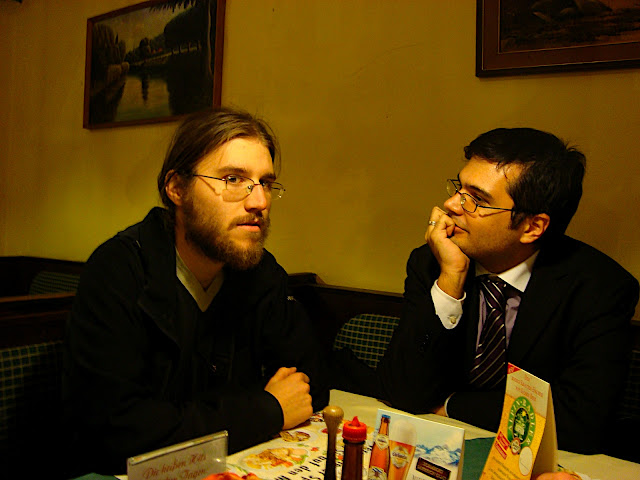 Jason Dagit gave a presentation about our type-witnesses, how the type hackery in darcs is implemented, and why it is useful.

Thomas Hartman and the Portland crew discussed patch-tag: how it felt from a user perspective and what the most useful features would be. 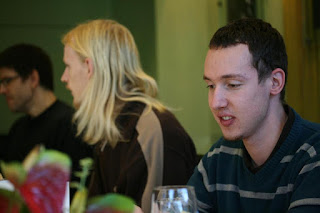 Thomas Danecker, Eric Kow, Petr Ročkai, Ganesh Sittampalam (IRC) discussed the SVN integration project: what the roadmap should look like and how this feature might fit into Darcs, whether as a fully integrated feature, a plugin or a standalone application.

Salvatore Insalaco, Eric Kow, Reinier Lamers and all Vienna hackers developed the roadmap for Darcs 2.4 (January 2010) and Darcs 2.5 (July 2010). Using a chalkboard we listed the features we wanted, how desirable they were and what order we should do them in. 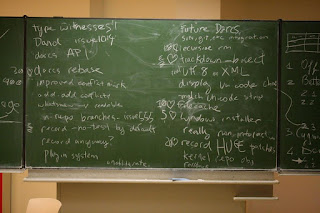 Salvatore Insalaco, Eric Kow and Reinier Lamers discussed the future of Windows support in Darcs.
Official binary: Our first priority will be to get an official binary for Windows downloadable from Darcs.net. The upcoming Darcs release (Darcs 2.4 in January 2010) will the first to provide an official binaries. Currently, we have the resources to provide a binary for Windows only, but in the future the list of platforms may grow.
Refined integration: After the Darcs 2.4 release, we will work on developing a friendly Windows installer for Darcs which includes not just the Darcs binary but (optionally), TortoiseSSH for better ssh support and a tool for sending email via darcs send.
Cygwin support: We will not be able to support Cygwin, but we will work on providing more explicit documentation on what works (mostly everything) and what does not (absolute cygwin paths). We think that the improved Windows installer will provide a sufficiently comfortable Darcs experience for most Cygwin users.

Every sprint teaches something new for what we hope to be a long tradition of biannual Darcs Hacking events.

One thing which worked out well this year was that we provided a clean list of the best ProbablyEasy bugs for new hackers to work on. This allowed new developers to make highly desirable contributions from the very beginning. This year the list was built with live discussion, a few Darcs Team members huddled in a hostel room over an open bug tracker. Perhaps we can replicate the success by having similar pre-sprint meetings in the future.
Replicating success is one thing; how can we do even better? Mainly we need to improve the experience that new hackers have. We were lucky this year to have many new Haskellers and Darcs developers, but we could have done a better job in helping them to get started.
First, some technical issues: A lot of our new developers lost the better part of Saturday morning setting up the machines to build Darcs and to send patches to the list. In the next sprint, we will be ready with much more precise and detailed setup instructions (developed hastily during this sprint) going all the way to the best default settings for Darcs, configuration files for msmtp (or similar sendmail replacements). It also has been suggested that we provide a virtual machine image for instant Darcs hacking.
Second, our mentoring strategy: We were fairly successful at providing in-depth individual mentoring; however what we could done better was to provide more mass mentoring at the very beginning, to help developers send their first patches. To make this work, we should try starting the next sprint with a group mentoring session with the specific purpose of getting people set up to send their first patches. We should encourage new developers to work in small teams, for example with an extra USB keyboard to facilitate pair programming on a single machine. 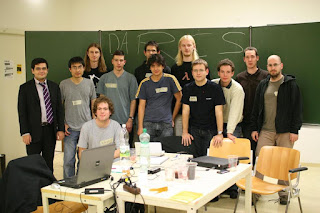 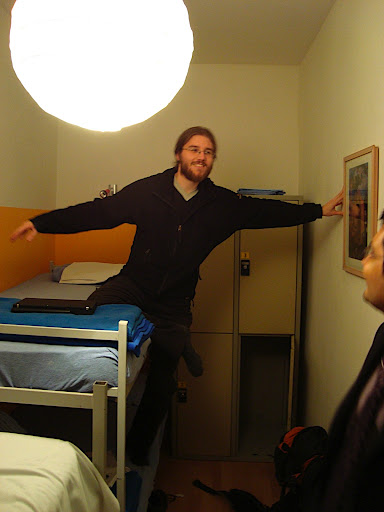 Many thanks to the local team at TU Vienna and Galois for a wonderful welcome! Thanks to the many generous donors who helped us to subsidise travel to the sprint. Thanks also to Microsoft Austria for sponsoring the sprint with drinks and snacks. Molte grazie to Salvatore Insalaco for a wonderful lunch on Sunday.
Finally, thanks to Petr and Luca for the photos, and more generally to everybody who participated in the sprint! It was great to have you and we hope to see you again either on the mailing list or at future sprints.

See you in March!

The fourth Darcs Hacking Sprint will be taking place in Zürich on 19-21 March 2010 as part of the Haskell Hackathon. Hope to see you there!
Posted by kowey at 10:22 PM

Thanks for the report and nice pics. Are any reviews on data room solutions expected?

I can only express a word of thanks. Because with the content on this blog I can add knowledge I, thank has been sharing this information. Do not forget to visit our website to share information hotele

The information you are providing that is really good. Thank for making and spending your precious time for this useful information. Thanks again and keep it up. Top CA firm in India

This article will outline all the different strategies you should be aware of when it comes to soccer.

Students may find it difficult to understand the Erikson theory assignment problem and supervisors' expectations or may not have time to work on the complex requirements of an entire assignment or may lack the good writing skills needed to work on the assignment. We take care of your skills and help you in every aspect to get good grades. Get an Online grammar check that focuses on providing client satisfaction and instant gratification.

Hello Everyone! We have a team of highly trained and experienced writers from all over the world who provide excellent assignment writing service to students, we have consumers ordering your assignment help service from a variety of places. We make certain to hire the best writers who can provide you with high-quality work and online assignment help so that you can easily boost your college grades.

Marry James is a writing Expert with 15+ years of experience. Marry is also associated with MyAssignmenthelp.com, where she regularly helps students write their essays/assignments. In addition, Marry also likes to read and has read more than 100 books now. Students prefer his services as a tutor and as a counsellor and guides students on academic issues. She offers HTML assignment help to students who need help with their papers. Marry is a programmer too, so she has detailed knowledge about the subject.

This article will frame every one of the various methodologies you ought to know about with regards to soccer.https://forum.cs-cart.com/user/198954-yogesh54/

Quality assignment can be prepared but only if you take Macroeconomics assignment help rather than wasting time on it.

Thank you for providing the information with a post.
USA assignment help

Thank you for sharing such a great article.
pink velvet cake